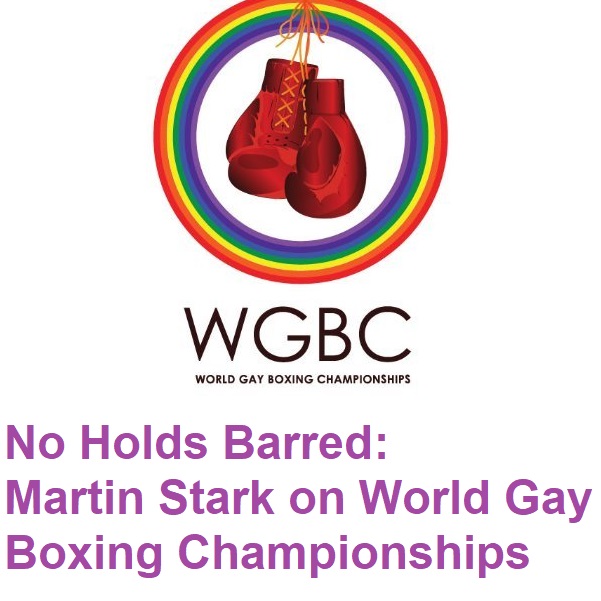 On this edition of No Holds Barred, host Eddie Goldman spoke with Martin Stark, the founder and CEO of the World Gay Boxing Championships.
The plan is for the inaugural World Gay Boxing Championships to take place in Sydney, Australia, in February 2023, coinciding with Mardi Gras and World Pride in that city. The World Gay Boxing Championships are open to all LGBTQ people but are also straight-friendly, and thus open to anyone.
We spoke with him by Skype Monday (Sunday in the U.S.).
The origins of the World Gay Boxing Championships are directly related to Martin Stark's own story.
"It literally started last year when I was in the hospital. I have the rare autoimmune condition Addison's disease, which basically means my adrenal glands do not produce cortisol, which is the same condition that President JFK had," he said.
"Now, last year I had hospitalization because of my disease. And to motivate myself, I contacted the Gay Games in Hong Kong to inquire about the boxing program. And they came back saying unfortunately boxing didn't make the list of sports for the next Gay Games" in 2022.
"So I came up with the idea with, well, I've been boxing for a period of time now and I wanted to compete. But I wanted to compete in an LGBTQ sporting environment. So I decided to create the first world, the world's first-ever LGBTQ boxing tournament, and called it the World Gay Boxing Championships."
Next he had to see if there was significant interest in this idea.
"It was just an idea. I started sharing my idea on LinkedIn, and friends started supporting me," he said.
"So that's how it all started."
Since then, the World Gay Boxing Championships was set up as an Australian not-for-profit organization.
In October of this year, Boxing Australia, the national federation for amateur boxing in Australia, announced that they are supporting the World Gay Boxing Championships and will assist with the organization of their events. The amateur boxing rules of AIBA, the Olympic boxing federation, will be used in these fights.
But the goals of the World Gay Boxing Championships go much farther than just organizing another boxing competition.
Part of what they are doing, said Martin Stark, "is to disrupt homophobia, biphobia, interphobia, and transphobia, so that people feel safe to compete in the beautiful sport of boxing, an amazing sport of boxing.
"And I have said repeatedly that by the end of this decade," he added, "I set up the organization to no longer exist. There is less hatred in sports."
Of course, he realizes that this goal remains to be achieved.
"We're not there yet. And we've made some great progress this century, but there's more work to do."
We also discussed plans to increase funding for the World Gay Boxing Championships, plans to develop more grassroots boxing clubs and participation, plans for smaller fight nights leading up to the event itself, and much more.
If you are able to, please make a donation to support No Holds Barred so that the truth can still be told. You can do so at PayPal.me/nhbnews.
The No Holds Barred theme song is called "The Heist", which is also available on iTunes by composer Ian Snow.
No Holds Barred is sponsored by:
LenneHardt.com, the home of Lenne Hardt, the legendary MMA and sports announcer, voice actor, singer, actress, and comedienne. Lenne is also known for her jazz vocals with her Lenne Hardt Jazz Cabaret Band. For more information, to book her, or to order a custom message from her, go to LenneHardt.com.
Skullz Combat Sports Equipment, creator of the patented Skullz Double-End Bag, is the perfect punching bag for your combat sports training. Skullz Double-End Bags provide a realistic striking target, and help improve speed, distance, and timing skills. Hang it and hit it right out of the box! No pump required. Skullz Combat Sports Equipment - Advancing combat sports equipment for the next generation of fighters. For more information, go to https://instagram.com/skullzcombatsports and https://facebook.com/skullzcombatsports.
Adolphina Studios. Original art prints and handcrafted fine jewelry. For more information, go to https://www.etsy.com/shop/AdolphinaStudios.
Thanks, Eddie Goldman
EddieGoldman.com